After the huge success of Frenchie in Paris, chef Gregory Marchant brought his popular brand of sharing dishes to the Big Smoke. This modern luxe restaurant serves up some interesting plates of food – not everything is a hit but overall it’s good. The lights are gorgeous but could do with being a bit dimmer for night time dining. Service is fun but professional.

GROUPS Up to 8 ppl

I try at all costs to avoid the tourist trap that is Covent Garden. It literally gives me anxiety walking through crowds huddled around performers in the square. If you can bear it, muscle your way through the crowd and soon you’ll be greeted by a more quiet chic space that goes by the name of Henrietta Street, where you’ll find a few upscale shops, The Ivy Market Grill and Frenchie…

Gorgeous airy space that’s luxurious but casual all at the same time. The place is a little too bright for night time dining, could do with being a tad more dim. There’s a sleek bar in the centre of the upscale dining room where one can eat from the exact same menu offered to the diners on the individual tables.

There’s a smaller seating space downstairs by the kitchen that feels even more casual with a few pillows strewn on the sofa table units.

So chef, Gregory Marchand, made his name in restaurants in England where he picked up the nickname Frenchie. He eventually went on to set up his own spot in Paris by the same name and amassed a big following quickly. A little over a year later he decided to replicate the success in London and the rest is histoire.

I had it on my list when I recently visited Paris but didn’t quite make it, so when a friend was visiting London from Paris I suggested we go here to satiate my curiosity of this culinary brand.

We kicked things off with a lovely refreshing but expensive grapefruit cocktail (£14).

The menu is split into 4 sections: bites | starters | small plates | larger plates. We had a gorgeous little bite in the form of crab on a sort of seaweed cracker.

Next up was squid ink ravioli with the smoothest potato purée sitting on lobster bisque which had quite a thick consistency that I wasn’t expecting but was really flavoursome; this dish had a sprinkling of pearl barley which gave it a delicious crunch.

Then came two larger plates: duck and turbot. Anyone who knows me well knows I have a slightly unhealthy obsession with this bird – I’m more of a duck leg kind of gal but I can mos def get down with some breast – the breast in question was tender and sweet with a peppery kick that came from green harrisa  – the chickpeas and charred green beans on the side were infused with sweetness from the thick sauce on the plate.

The turbot was equally delicious, cooked well (the skin was a bit rubbery but I didn’t begrudge that) with a bit of sweetness coming in via the kumquat balanced with citrusy lemon verbena. The potato and veg were also perfectly cooked.

Last up was dessert and my friend ordered the chocolate one which had a sprinkling of bacon – I don’t eat pork, so I scooped a bit around it and it was pretty yummy. 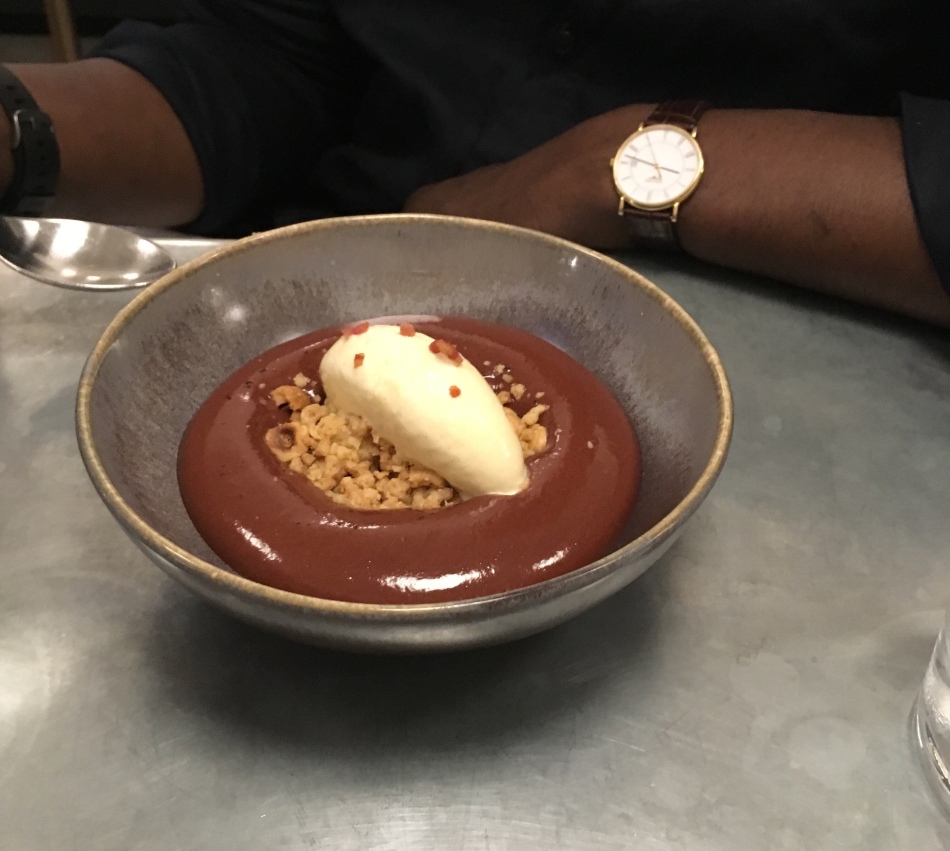 I opted for a beautiful peach and pecan tart with tonka bean ice cream -rich buttery pastry that had me at hello.

My only gripe at the time is that the food felt a bit tepid but I do like my food hot hot hot, so perhaps it’s just me…

and there was a slightly different menu. The food was good but I didn’t come out feeling as excited about Frenchie the first time I went and I’m not really sure why. I think it may have been a combo of one of the dishes not been to my liking at all, being very aware of the bright lights and the fact that we were seated at the corner of the bar which made us feel somewhat out of the action. Also, when the price point is not so low, you become less forgiving about details like this. However, I must say, the service was charming even if a little slow.

Here is the Smoked Arctic Char Tartare, Chive & Kalamata Bergamot dish that I had – super fresh and zesty

I can’t remember what fish this was but I wasn’t at all excited about its side hustle, a medley of yellow tomatoes, raspberries and some herbs – this just tipped too far on the sweet end of the scale for me. Being summer, I understand why they’d put out a dish like this but I just wasn’t into it.

This beef dish was cooked well, enriched with a bit of parmesan and made even more decadent with the cured egg; I also really enjoyed the chargrilled broccoli and mushrooms.

Despite not enjoying Frenchie as much as I did on my first visit, I would deffo recommend it as a good dining option in London.

Mixed crowd – generally tends to be a slightly older cultured looking crowd. Quite a number of couples. Lots of patriots too in the form of Frenchies (on both occasions I visited)

Good modern French fare in a contemporary setting. A little on the pricey side. I would definitely revisit but not sure this will be a regular for me.