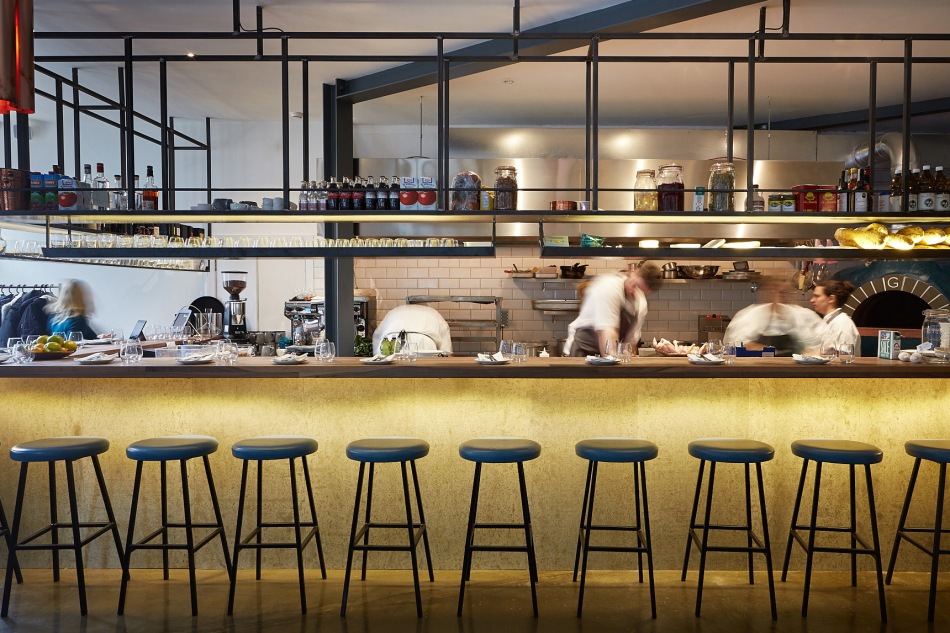 Oklava is on Luke Street about a 7 mins walk from Old Street.

The revamp of this space is impressive, according to my friends, who dined with me that evening. Apparently, the previous restaurant that used to occupy this spot was not so attractive.

The focal point of the room in this new refurbished space is the bar, which wraps around the kitchen with a lovely blue grill tucked away in the corner.

There are a few individual tables with marble tops, plotted across the room but the seating mainly comprises stools dotted around the outer edge of the room and at the bar itself. It’s a smart, modern looking space with blue and rose gold accents.

Go to Green Lanes near where I’m currently living and you’ll find a street bursting at the seams with great value, traditional  Turkish restaurants, offering up tasty grub.

So, I felt a bit like a traitor venturing out to Old Street to eat fairly similar cuisine. Yes, you can get pide double the size of the ones on offer in Oklava, from one of the many restaurants on Green Lanes, yes of course you can get lamb köfte.

However, you won’t find any seafood (well I haven’t) nor will you find sublimely roasted cauliflower on the menus in these restaurants. Selin is experimenting with food from her native land (e.g using octopus as a topping in a pide dish) and as much as I love the Green Lane Turkish restaurants, they don’t have that cool contemporary look and feel, another thing that sets Oklava aside from them. You also won’t get decent wine, which you do at Oklava.

So, yes, some may call me crazy for ditching the restaurants on my door step to opt for Oklava instead but that’s not really the case, as they are offering pretty different things ultimately.  I will  continue to hit up the Turkish restaurants in my hood, no doubt about that.

Right, justification out the way, let’s tuck into the food itself…

The housemade bread is complimentary and a damn fine one at that and the medjool date butter…well, I could happily have eaten that all night (and I did). They apparently have started stocking the butter in Selfridges, so I’ll be heading there to get my fix. 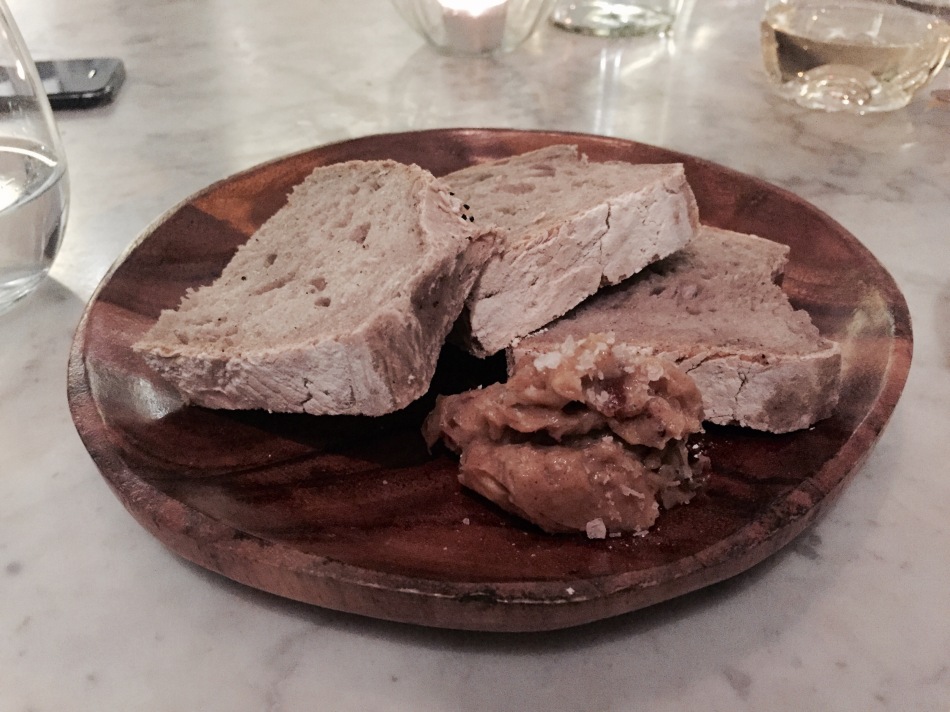 The portions are tapas size and I was really worried we were going to wrack up a huge bill at the end of the evening. Between four of us, we ordered x2 snacks and 8 main plates – so let’s say on average 2 dishes per person. I could have eaten more, so I would recommend maybe x3 main dishes per person or x2 main dishes and a dessert.

From the snacks section, we ordered the courgette, feta and mint fritters which came as a duo and were perfectly crisp but a little on the salty side. They were good though and I’d probably order them again.

Courgette fritter – I was lucky to get this shot before it was swiftly gobbled up!

On the list  of plates we ordered was the monkfish, which was cooked perfectly – no rubbery disasters here. I like monkfish because it’s quite a weighty meaty fish but in my opinion it’s a fish that definitely benefits from a good amount of seasoning, otherwise it can end up tasting rather bland. Selin balanced her flavours perfectly – the citrus, Urfa chilli dressing and coriander combined to create a very enjoyable monkfish dish.

I’ve fairly recently discovered the joys of cauliflower – I think years of over boiled cauliflower at school put me off and made me reluctant to ever order this glorious vegetable when eating out or even cooking at home. However, a friend made a cauliflower cake/ bread, thingma jig once and showed me that cauliflower really can be a wondorous lovely thing indeed. So, now whenever I see it on a menu, I make a point of ordering it. Such was the case that evening and boy am I glad I did. Roasted to perfection with red onion, parsley and pistachios, this vibrantly coloured plate of food tasted as good as it looked.

The octopus pide (sort of like a calzone) came on a cool albeit impractical, wooden slab  – long and thin, it took up too much space on the table.

Close up of the octopus pide

I really enjoyed this  dish but the octopus itself didn’t really bring much to the plate; it almost felt like an extra in a film rather than a leading protaganist. The portion was meagre and I got a lot more satisfaction from the other elements (ricotta, green olives, honey, pickled caper, shoots and thyme). Salad and pickles came as an accompaniment to the dish and was super fresh and tasty.

The long wooden board – took up nearly half the table! Lovely colourful fresh salad

I ordered the chicken for myself (comes as two small legs) and I reluctantly shared a bit of it with my fellow diners as it was delicious! Perfectly spiced Za’atar chicken – it feels like one of those dishes that could so easily go wrong, by misjudging the amount of spice required but in this case , it was measured perfectly and really was a dreamboat. I was so keen on the dish, I threw caution to the wind and picked up the legs and had a good go at extracting all the meat from the bone. Super classy. I know. 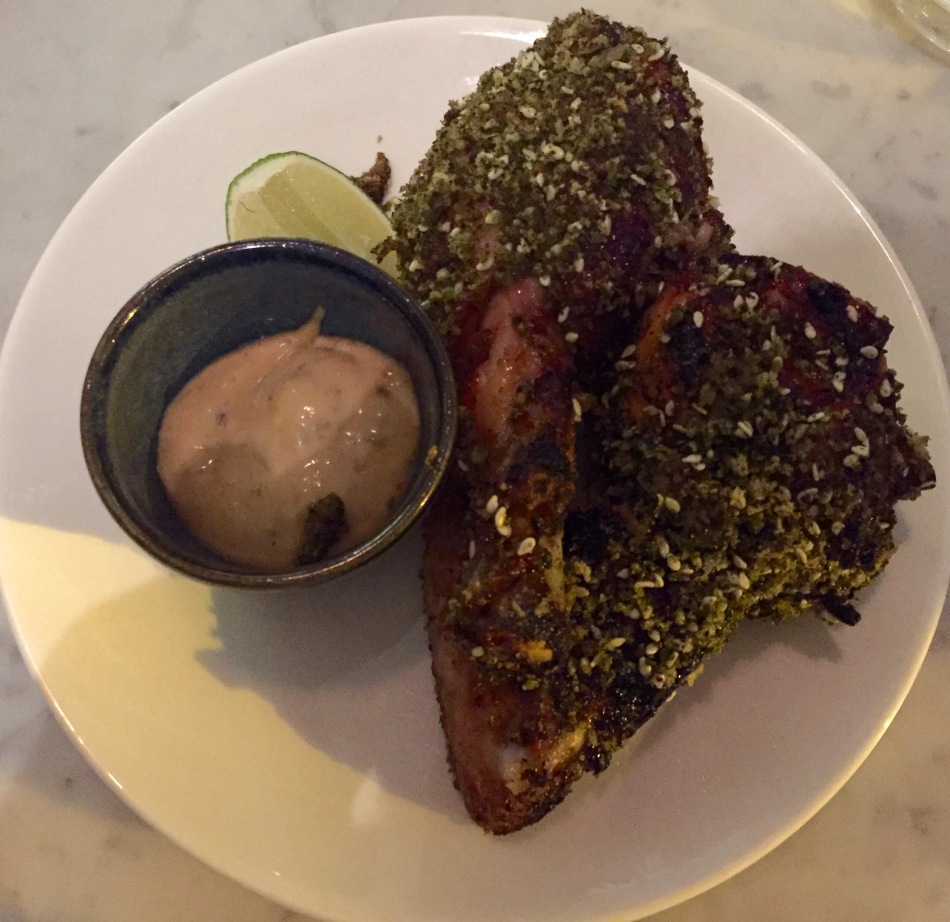 What I really like about Selin’s cooking overall, is that she is able to strike a really good balance between savoury and sweet in her dishes. I didn’t get to try the dessert for reasons outlined below, which made me so sad as I have such a sweet tooth.

Two waitresses looked after us over the course of the evening and were perfectly lovely and charming. Drinks were a bit slow to arrive despite it not being particularly busy at the time but other than that everything else was pretty grand.

However, the end of the evening turned a bit sour. I had arrived on time but the rest of my party were late and we all apologised several times for this.

Being late meant we had a truncated time slot, so towards the end of our allocated time, we were essentially hurried to make space for the next set of diners, which is absolutely fair enough, had it been handled appropriately.

We were all still a bit hungry, so asked if we had time to order another dish – we didn’t, not where we were sat at least. Most of the seats on the outer edge were empty, so I asked the manager, if we could please move our party there and was abruptly told yes but it would have to be a main meal or dessert – no time for both; they had another booking in 30mins, so we would have to clear off sharpishly.

Oklava is a small space with a few tables as I mentioned before – I get it 100% that they needed to prepare for the next table but the way the situation was handled was too curt and made us feel really unwelcome – such a shame after what had been a truly pleasant evening, up to that point.

A great restaurant experience must combine fantastic food with flawless service – all the hard work in the kitchen is rendered useless if the front of house doesn’t deliver too. I was genuinely gutted at how the evening ended, so when I received a feedback form from Oklava, I used the opportunity to explain how we felt.

So much blood sweat and tears no doubt have gone into Oklava and it’s one of the best meals I’ve had in London all year, so I want to praise it endlessly – I’m not into criticising establishments for no good reason.

I explained I wasn’t looking for an apology but just wanted to be sure that I would be accommodated in a nice way the next time I went back and the manager reassured me I would. She did apologise nonetheless and ultimately I think there may have been an element of miscommunication.

Anyway it’s all water under the bridge. Oklava is a fab addition to the London restaurant scene and I’d definitely go back.

We went on a Saturday evening. The only slot we could get was 6:15pm, so it was fairly quiet. Mellow, cool beats played in the background and overall it was quite a relaxed ambience despite feeling hurried towards the end.

After being worried how much our tapas plates were going to amount to, I was pleasantly surprised when we received the bill. Two out of the four of us were drinking – I had 3 glasses and my friend had 2 glasses. So, in total if we looked at it on average, each person had 2 plates of food and a glass of wine and this came to c.£25 per person.