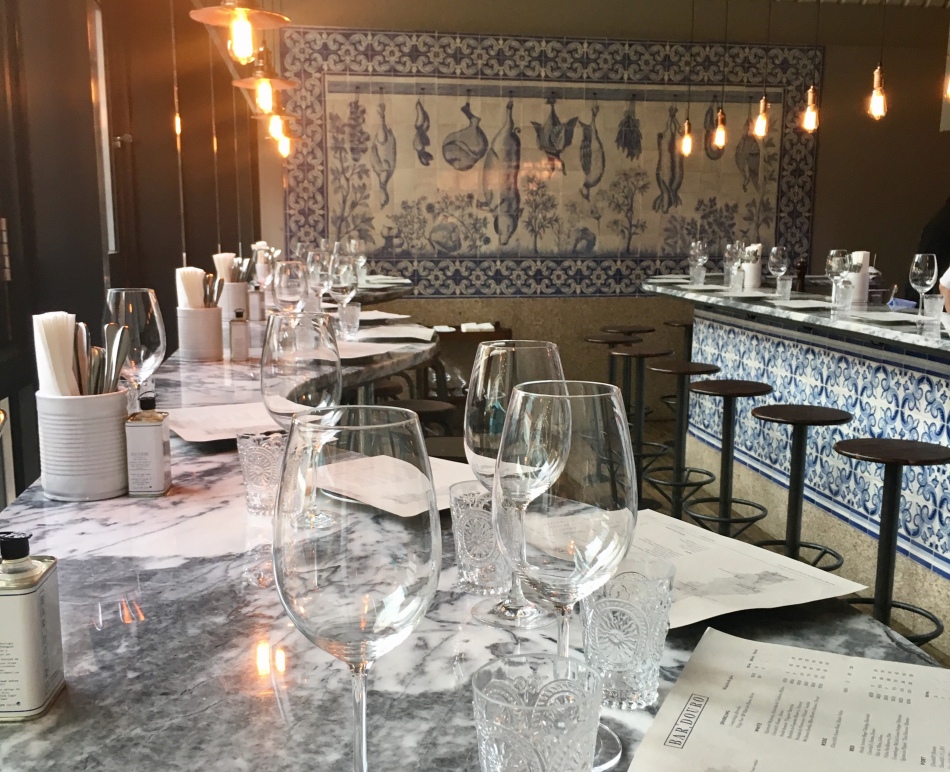 A little slice of Portugal smack bang in London Bridge

Decorated with beautiful azulejos, Bar Douro, is a little slice of Portugal smack bang in London Bridge, which has become a food destination beyond Borough Market. My must orders are the hake goujons and pastel del nata with cinnamon ice cream; I was less excited by the rice dishes and piri piri chicken. I would definitely revisit Bar Douro – it’s a gorgeous space and despite not every dish being to my taste, there are some very good plates to tuck into.

4 mins walk from London Bridge and located within Flat Iron Square (an informal food and drink destination with multiple traders), Bar Douro is a standalone Portuguese restaurant right by Where The Pancakes Are. 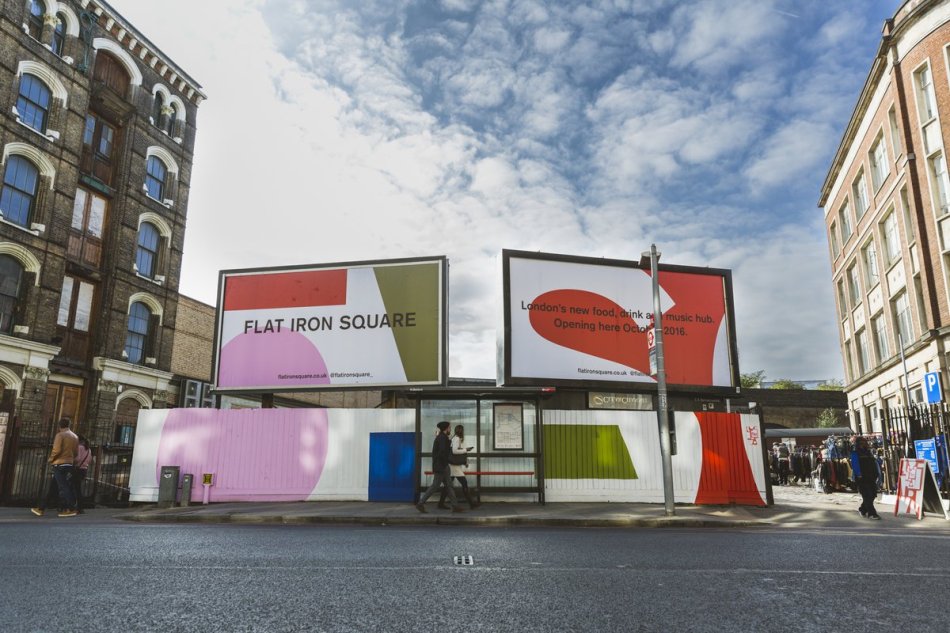 Bar Duoro is all bar and by that I mean – there aren’t any individual tables – the main bar where drinks are served faces the kitchen and a row of fixed stools sit prettily waiting to be occupied. The remaining seating wraps around the length of the room – facing out onto Flat Iron Square. Marble counter tops are super popular at the moment and it’s not hard to see why – they provide instant glamour to a space. At Bar Duoro, the main materials at play are the aforementioned marble and beautiful blue and white tiles in homage to the food of its motherland. If I had to describe Bar Duoro as an outfit – it’d be understated navy Acne jeans, a white t-shirt with a blue Lanvin coat thrown over. Bar Duoro are clearly keen on their name as they’ve not only branded their plates but also their super cute cans of olive oil with it.

I really dig the aesthetics at Bar Duoro – it’s a small space that’s elegant yet casual. 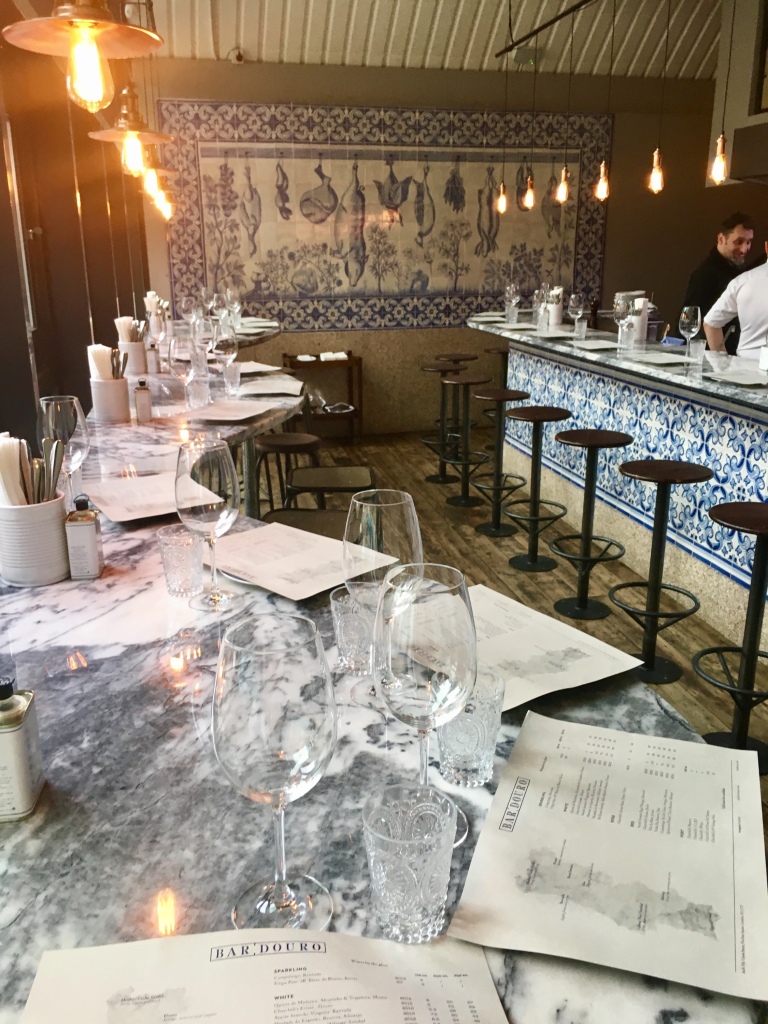 I’ve been to Bar Douro a fair few times during my lunch break. The first time I went, I ordered the hake goujons which were cooked to perfection – beautiful thin crispy outer coat – lovely flaky flesh on the inside. I adored the mayo dip with chives that came with it which had a gorgeous silky texture. 10/10 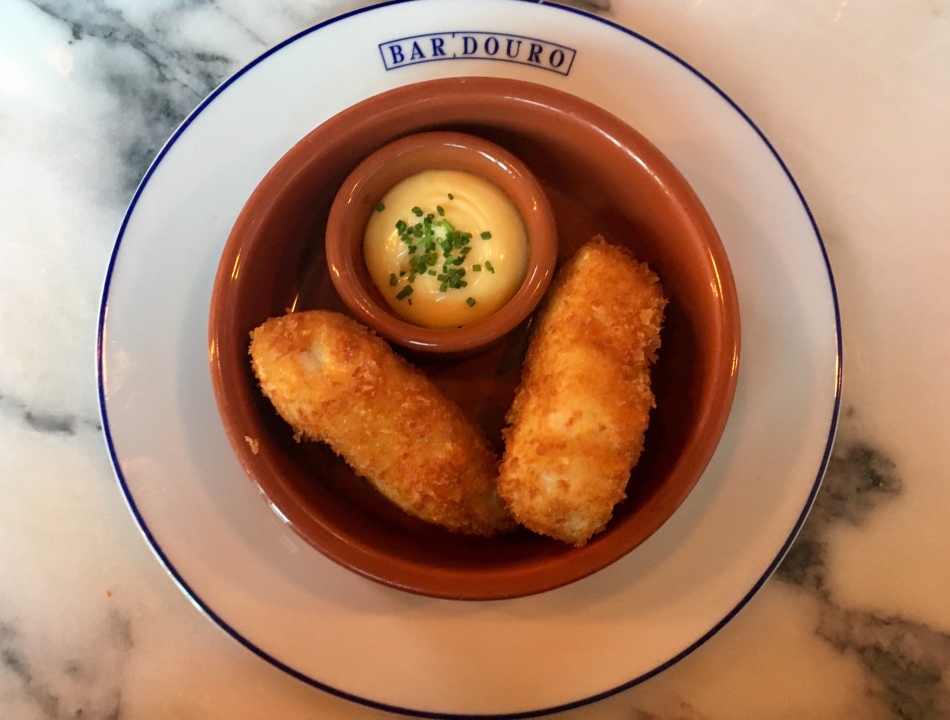 I fancied some bread but the one on the menu had pork in it and as a non pig eater, I asked if I could have mine without it – so the chef kindly cut a few slices for me. The bread was nice and fresh and particularly fab when soaked in the lovely house olive oil, mixed with a touch of salt. 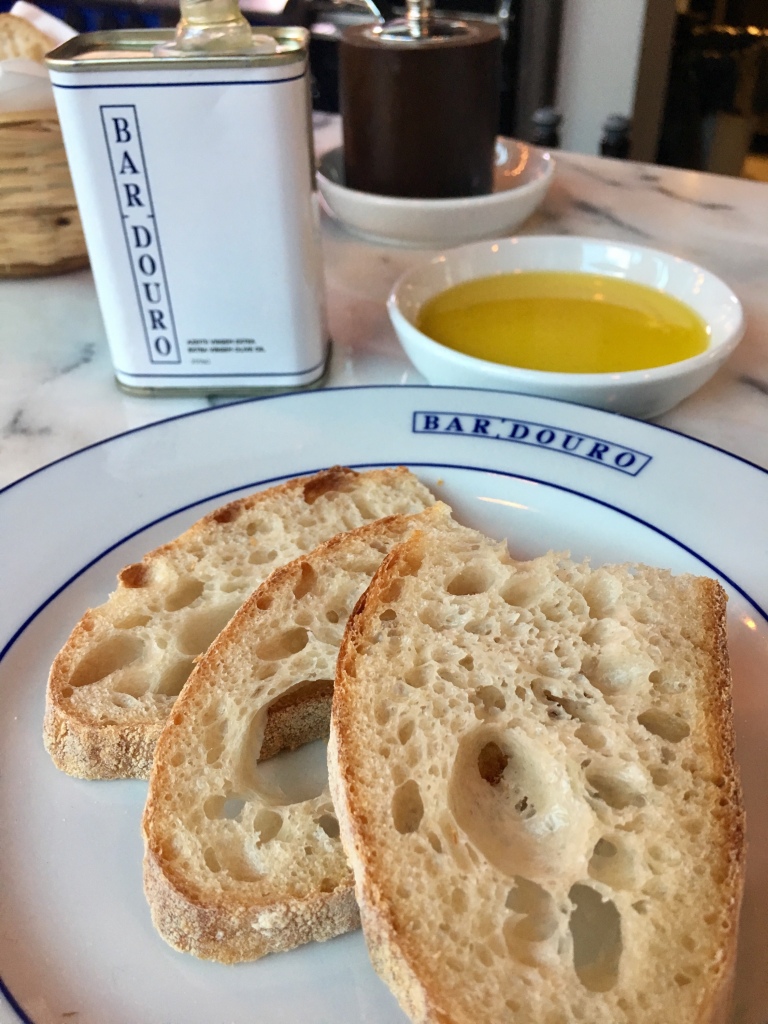 On my second visit, I got some salt cod cake fritters, again, cooked beautifully, light crisp coating on the outside with a bit of a chewy consistency on the inside and a side of piri piri sauce. I personally wasn’t too keen on the batter and chewiness but that’s just my personal preference vs it being bad per se. 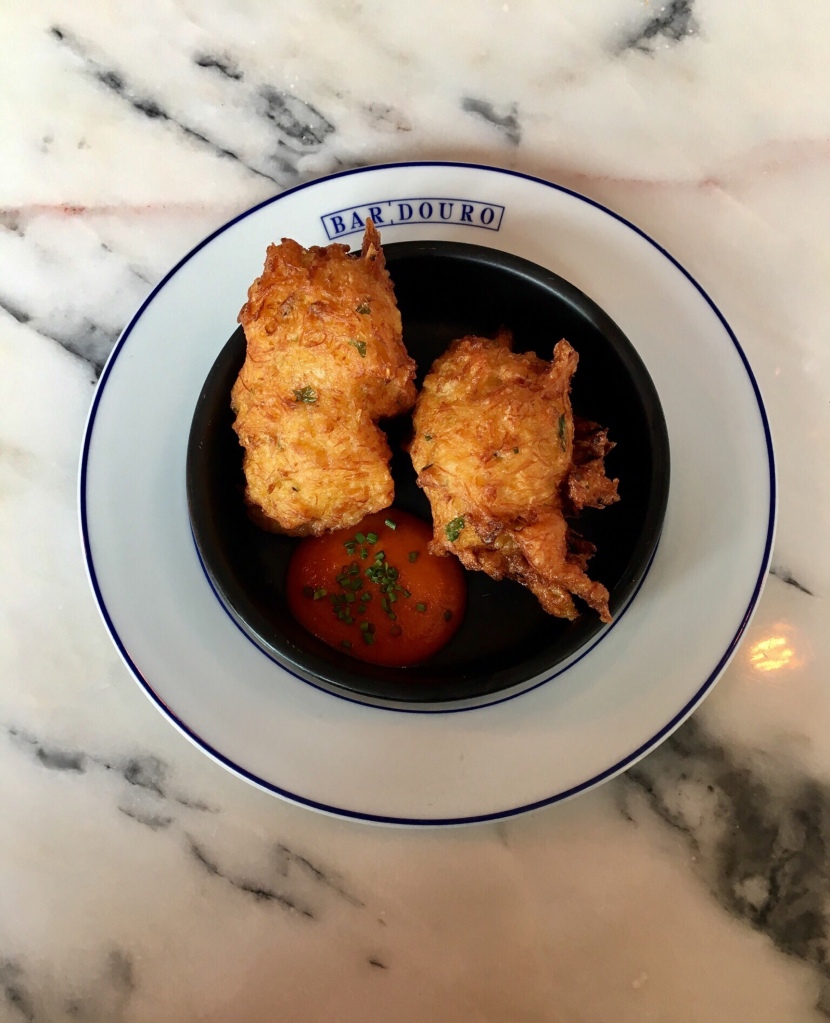 I followed this with what can only be described as divine – their pastel de nata with cinnamon ice cream. The plate was scattered with cookie crumbs that tasted a bit like shortbread and the cinnamon ice cream was lovely and creamy but not too heavy – an absolute triumph; you get peaks of the cinnamon but it doesn’t totally dominate, just a really lovely hint. The custard tart itself was brilliant and gooey on the inside with that bad ass flaky pastry crust it’s well known for. A must order. 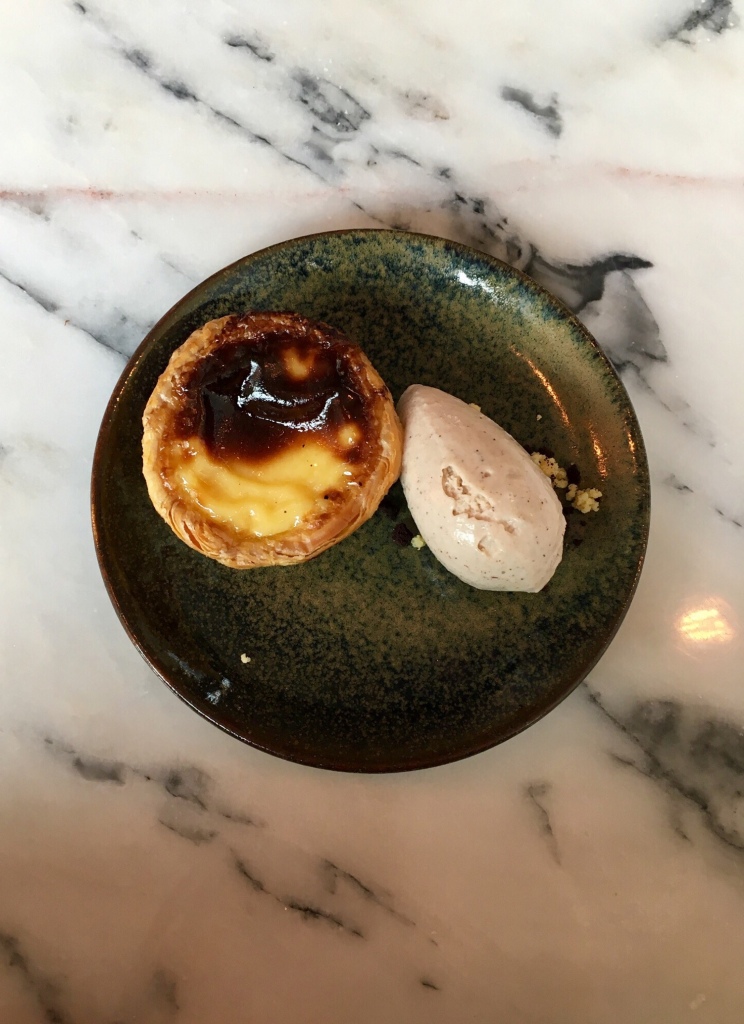 The third time I went, I had the wild mushroom and roasted chestnut risotto. The rice was firm but not hard and topped with raw slices of mushroom; I didn’t love this, there just wasn’t much depth of flavour. 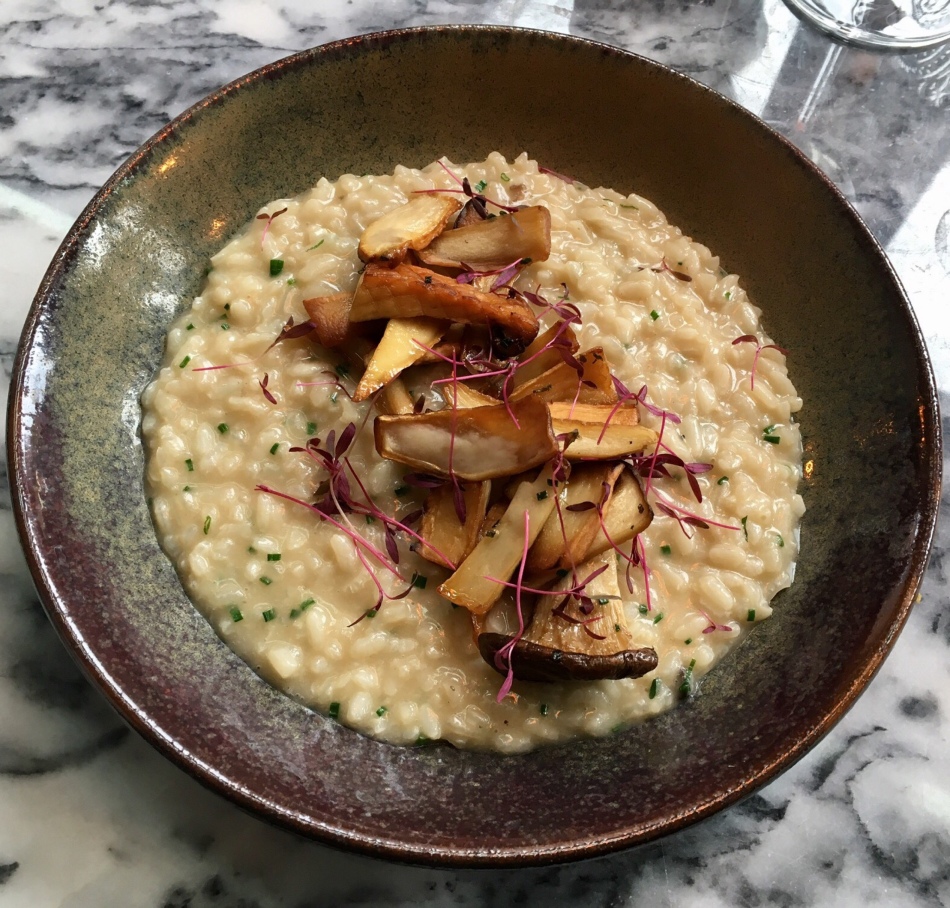 The piri piri chicken was fine but I wouldn’t order it again. 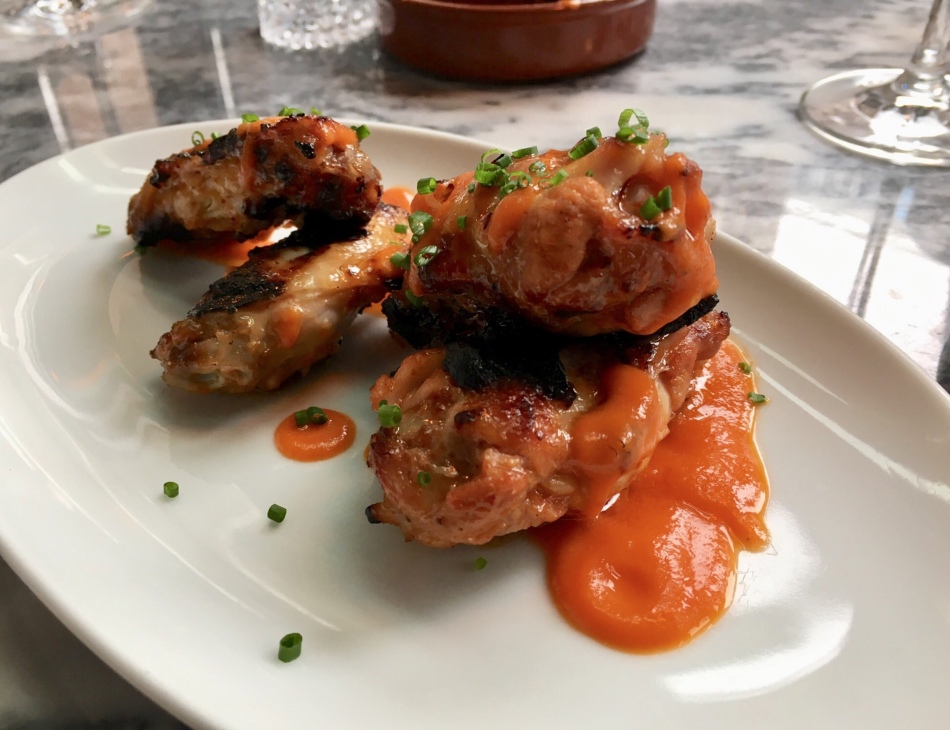 Also ordered the battered hake with tomato rice – the salt punched through from the fish to bring some much needed flavour to the simple tomato rice. 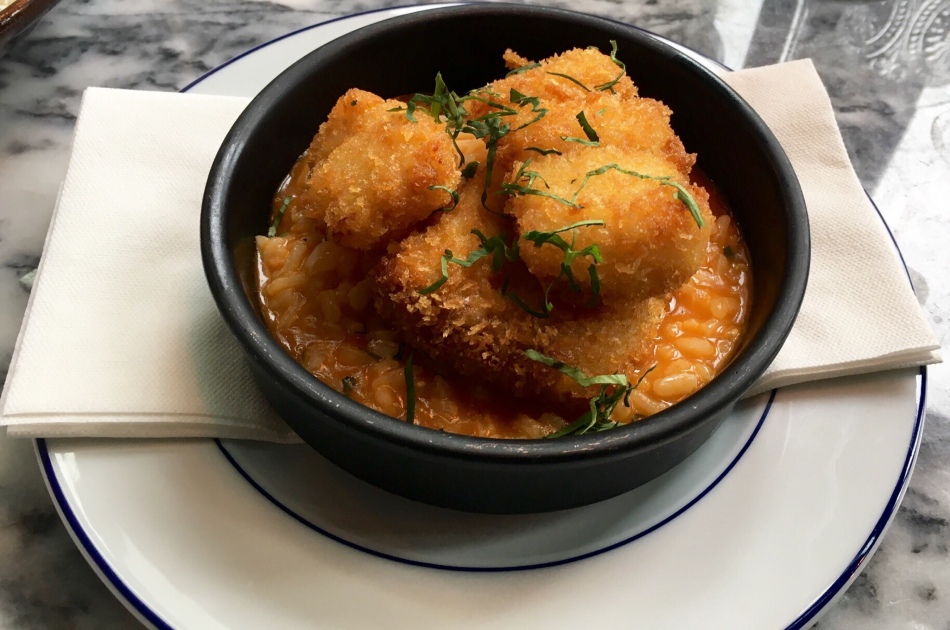 The service is warm and friendly and the head chef in particular is a lovely chap.

I’ve only ever gone at lunch time and gone for their lunch deal x2 plates for £11 but if you were to go for dinner, I would say budget about £35 if you want to get a couple of small plates, dessert and wine. I think it’s very reasonably priced.

As mentioned, I’ve only ever been at lunchtime (around 2:30pm) and it’s always quiet. However, a friend said she tried to go for dinner and the place was packed with a sizeable queue, not hard considering it’s a pint sized space, so I reckon it’s pretty buzzy come nightfall. Amazingly, you can actually book unlike many of the small hip restaurants in London town.

Decorated with beautiful azulejos, Bar Douro, is a little slice of Portugal smack bang in London Bridge, which has become a food destination beyond Borough Market. My must orders are the hake goujons and pastel del nata with cinnamon ice cream; I was less excited by the rice dishes and piri piri chicken. I would definitely revisit Bar Douro – it’s a gorgeous space and despite not every dish being to my taste, there are some very good plates to tuck into.