Palatino is on Central Street in Clerkenwell – 11mins walk from Old Street.

This is the saddest part about Palatino. I have no idea why they decided to shove a perfectly good restaurant in a coworking space.

We weren’t able to get a table for dinner during the soft launch, so we arrived early Fri evening and were kindly accommodated at the bar. However, we were placed at a section of the bar which literally felt like it was part of the office complete with open air forum and electric gate barrier. This coupled with the lighting just didn’t get me in the groove for a girly catch up with my pal. It just felt like we’d taken a break from work and were hanging out in the office restaurant (albeit a rather plush one).

We surveyed the room and whilst relatively empty we understood it would likely fill up soon, so asked if we could sit in the bar area that was closest to the restaurant, so we could feel part of the action a little. Fomo or what? Whilst a far better part to be sat at, it still all just felt very very odd and just not a place I felt like I wanted to hang out in.

Design wise, it’s sleek and contemporary with yellow being the main accent colour. However, again, something just felt off. Like they’d copy and pasted a Pinterest page and brought it to life. Perfectly nice but just lacking in soul if that makes sense?

This is the latest venture from Stevie Parle with a focus on the food of Rome – the dude who brought us The Dock Kitchen all those years ago, Kingsland Road hotspot, Rotorino and the delightful Sardine, which I wrote about here.

As with soft launches, it’s obligatory to sample a number of dishes because it’s 50% off innit.

First up was the cod crudo with olive oil, salt, cracked pepper and torn pieces of grapefruit flesh which was fresh but somewhat forgettable. 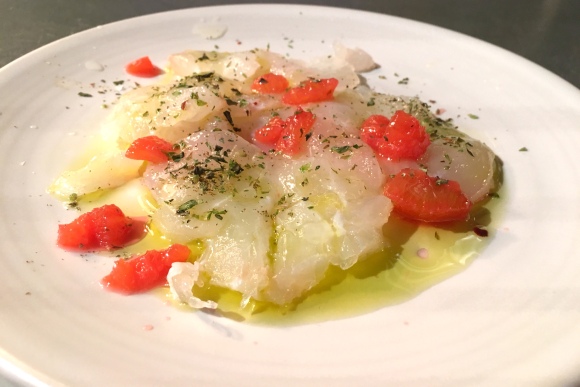 Next up was the sage and pumpkin ravioli with loadsa cheese – delightful – lovely texture and full of flavour.

Then, I ordered the bream with onions, pine nuts, raisins and vinegar which admittedly wasn’t a looker but was thoroughly enjoyable to eat and super comforting; I really loved the sweet edge the raisins brought to the dish. All in all, a rustic, homemade charming plate of food which felt out of place in the manicured picture perfect environment.

My friend chose the onglet steak with salsa rossa piccante which I had a tiny bite of. Tasty if a little tough.

We ordered some fried potato gnocchi and Swiss chard as sides. I ate about 3/4 of those little bastards, so moreish they were. The Swiss chard was super – really enjoyed the little medley with onions.

Dessert time – we opted for the chocolate pudd which was basically a lump of chocolate sprinkled with pistachio crumbs and lumps of honeycomb with a little pot of sour cream (out of shot). Yum yum.

Service was slow but they were acutely aware of this and apologised several times – so I was chill about this. Despite there being quite a few people on the floor, we found it difficult to grab their attention but that may have been because we were seated in a sort of blind spot (behind a massive pillar). When we did catch their attention they were ever so lovely and helpful. The Italian manager (I think he was the manager) was the only one that was a little off, not in an extreme way, just annoyingly sarcastic at times but ultimately he was helpful, so did his job well.

Also, I know this sounds like a small detail but some of the attire felt quite formal even though people on the whole were very laid back and nice. Palatino feels like it’s trying too hard to be upscale when actually it’s pretty casual at heart.

Again, difficult to get an accurate sense since we went during soft launch. Based on our experience, it wasn’t busy when we arrived super early but it did fill up as the night meandered on. However, the vibe was lacklustre from my perspective – it just didn’t feel like an exciting place to be.

We spent £32 quid each with 50% of the bill but it would have come in much less than that, had we not had x3 glasses of wine. Not subscribing to dry January clearly. The wines by the glass were decently priced and I had the Falanghina, Rocca del Dragone, 2015 which was easy down the throat and just £5.50 a pop. Antipasti start at £3 and go up to £8, Primi are at about £8 and Secondi range from £12.50-£20. Sides are 4 quid and desserts are £6-7. So, reasonably priced for London.

I don’t bother writing long form reviews lambasting places because 1) it’s not nice 2) total waste of my time. So, whilst overall this write up isn’t exactly glowing, I clearly wouldn’t have written about it if I didn’t think it had pockets of hope. The food and the service warrant a second visit, it’s just such a massive shame they had to plonk them in this bizarre space. If I came back I would certainly avoid the bar and make sure to book in the main heart of the restaurant. I’m sure the proprietors couldn’t care less about my opinion but Palatino deserves a better space than this.