52 Faubourg Saint Denis is in the 10th arrondissement close to Château-d’Eau metro. Although a number of trendy restaurants like Hubert (formerly Bistrot Bellet) which I visited a few years ago and shops like Atelier Couronnes are moving into the area, it’s still pretty gritty but it’s not got to the level of Shoreditch gentrification just yet. Still full of hundreds of hair shops and people trying to flog you shit you don’t need.

It’s a casual neighbourhood restaurant, with the marble top bar joined to a light wooden base, being the central focus of the space, surrounded by similarly coloured bar stools. Booths with muted green tables line the outer edge of the restaurant with individual tables filling out the rest of the space. Exposed pipes cut across the ceiling with a mixture of brick and concrete wall – sounds laboured but it just works. It really is a handsome laid back space.

We’d eaten at Septime only a few hours earlier, so I wasn’t super hungry and ended up just ordering a main dish. It’s walk in only and when we arrived on a Thur eve around 8pm, there were seats available at the bar, so we pulled up a stool and tucked in.

I had veal tartare with fresh courgettes and thin strips of crispy fried courgettes in a delicious horseradish cream sauce and a smattering of seeds – it was a light dreamy dish with well balanced flavours and textures. 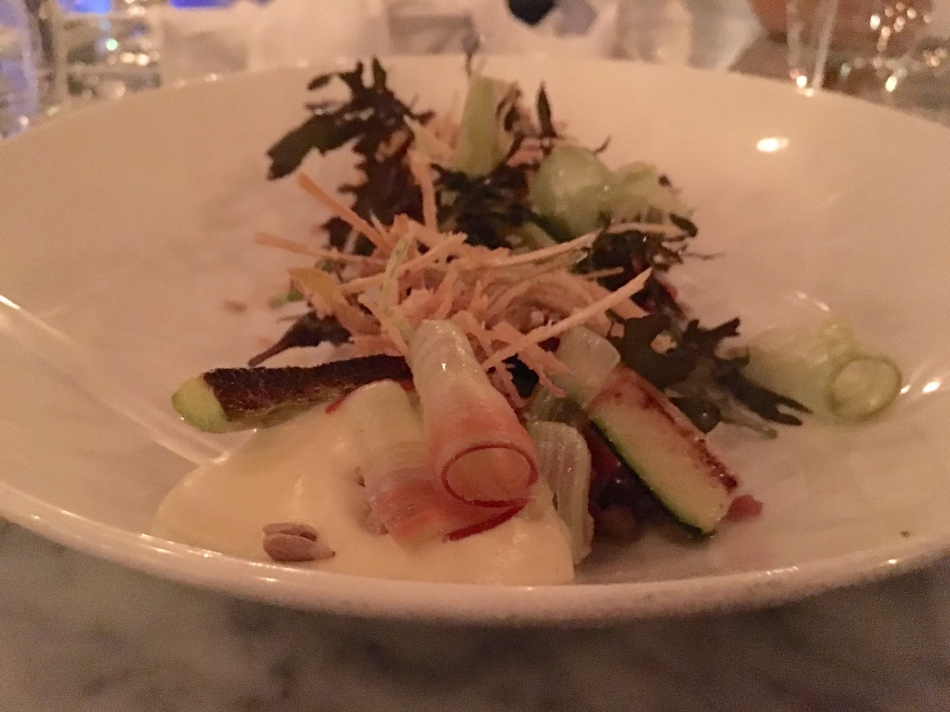 My friend ordered the rabbit and I picked at that – my first foray into the land of Lapin and oh my what a joy. Service was sarcastic but fun. I dug this place big time and would definitely recommend it.

Hip Parisians. Cool vibez without feeling try hard. I’d recommend eating at the bar (middle section), we had great rapport with the barmen who kept us entertained all eve.

Thoroughly enjoyable food to be had at this cool, laid back neighbourhood restaurant that is worth travelling to if you’re not based in the area.

Hours: Google says 8am-12am, so let’s go with that