Chimamanda Ngozi Adichie, probably the most well known ‘new wave’ of Nigerian novelists (whose words were famously sampled by Beyonce on her track ‘flawless’) shun the light on the Biafran War of the 1960s with her book Half of a Yellow Sun; a huge event in fledgling Nigeria’s history, who gained independence from British imperial rule only a few years prior. Focus is not on Ojukwu or Gowon, the main political players of the day but rather the ground level civilians that lived through one of the largest scale civil wars in the African continent, where over a million people were killed.

Half of A Yellow Sun is an important book because it presented the Nigerian civil war, warts and all, not only to an international audience but to many young Nigerians, some of whom had no clue before reading this book that this mass genocide had happened in their own country, less than 50 years ago. Startling.

The simple explanation for this is, no one talks about it.  The national curriculum fails to cover what arguably is one of the most important events in the history of Nigeria; i’m not sure if this has changed but I certainly wasn’t taught about the war when I was growing up in Nigeria; a campaign to obliterate this happening has clearly been successful. Coming from the South Eastern part of Nigeria, with relatives that lived through the war allowed me to be privy to the existence of the war.

The release of the film in Nigeria has been delayed because the censors board fear it may incite ethnic tension. This is bloody outrageous and reinforces all the more why it’s so important that this story is told. The recent abduction of over 200 school girls from the Northern part of Nigeria and seeming malaise on the front of the government or rather want to shroud everything in secrecy warrants further why we must stand up and tell our stories without being censored.

Half of a Yellow sun explores the relationships of a number of individuals from a myriad of different backgrounds against the backdrop of the Biafran war. Here is one of my first issues with the film. Whilst, the war is certainly not the focus of the book, it is more than merely incidental. We follow the characters as they move from town to town trying to evade the war but it feels more like a road trip, than flight from the terrifying onslaught. Sure there are bomb blasts that jolt you a little but at no point do I care about the plight of these people, nor did my tear ducts enlarge ready for a full stream of tears; and I’m a crier when it comes to such things. I really am. 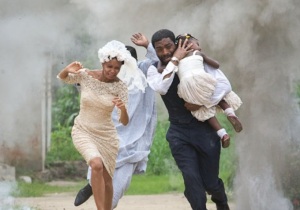 Another issue with the film is, the performances were in my opinion a bit weak, even Chiwetel failed to really impress; that is when one really appreciates the talent of a director and their ability to draw out truly evocative performances from their cast. Not only was the casting of Olanna off with the choice of Thandie Newton (the antithesis to the curvaceous sensuous image portrayed in the book) but it was a rather terrible turn from her – there is a scene where a bomb is going off and curled up in the back of the car, she is wailing to no end and I actually wished the director took creative license and killed her off there and then.

The various issues the book tackles, the film attempts to capture: the tension between traditional and post-modernist thinking; African pride and identity; and fervour for intellectual discourse. However, everything is explored on such a base level, I almost wish the director hadn’t bothered trying to cover all these different points. I certainly am not one of those pretentious twerps that condemns novel adaptations into films, always citing the inherent superiority of the former. It is priggish.

Films and books are different mediums and I totally appreciate that they should be treated as such but when the former fails to capture the essence of the latter, that is when I object. That is for me very much the case with the film adaptation of Half of A Yellow Sun. The bottom line is, it lacks the rawness, tension and heart that the book possesses.

The look and feel of the film has a bizarre Truman-esque / Stepford Wives artificial quality to it which just made the film feel all the more sterile and disengaged me.The pace of the film is so fast, one has little time to process one’s emotions. I wonder if the film would have been more successful if the director excercised a bit more constraint and didn’t try to give us what seemed to be a summary of the book which would have freed up time to comment in a meaningful way on for example the connection between the twin sisters whose relationship in the movie is really shallow.

It’s a huge shame that such a masterful story was reduced to what felt like a sequence of events in a very matter of fact way; two hours of soulless visual drudgery. Chimamanda herself has given what appears to be great support to the movie, which I must say I find quite surprising. So, perhaps, I’m being a tad too critical but it’s hard not to when one is so utterly disappointed because this could have been a great great film.