After two years of waiting in line or rather not wanting to wait in line, I finally made it to MEATLiquor, birthed from the successful street food truck / pop up, MEATwagon.

I was waiting to be disappointed after the insanely intense hype that has surrounded this place for such a long time (two years is a lifetime in ‘foodie’ ville) but they delivered and they delivered good. This explains the queues, this far into their residency, on Welbeck Street.

I like a spicy chicken burger that’s fo sho and MEATLiquor’s own was a triumph. The combination of the fried chicken, stashed with onions and lettuce and slathered with hotpepper sauce and blue cheese – DANG! – ‘twas like a hot dirty party in my mouth (in a good way, obviously).

The bun literally disintegrates in your hands; this would ordinarily piss me off but I found myself happily mopping up the fallen pieces with the juices that had dripped all over my tray (no plates here, don’t be silly). Purely on taste alone, it’s just as good as Patty & Bun. However, the latter is more refined, no doubt about that.

Guess that’s why MEATman (Yianni Papoutsis) and crew name it a dirty chicken burger; you will slobber (well, I did at least) and if you really want to enjoy that burger, you will need to lick those fingers. There’s a reason it is near on pitch black in there.

I had two cocktails: the Kurwa Sour and Game Over. Both were on the money. 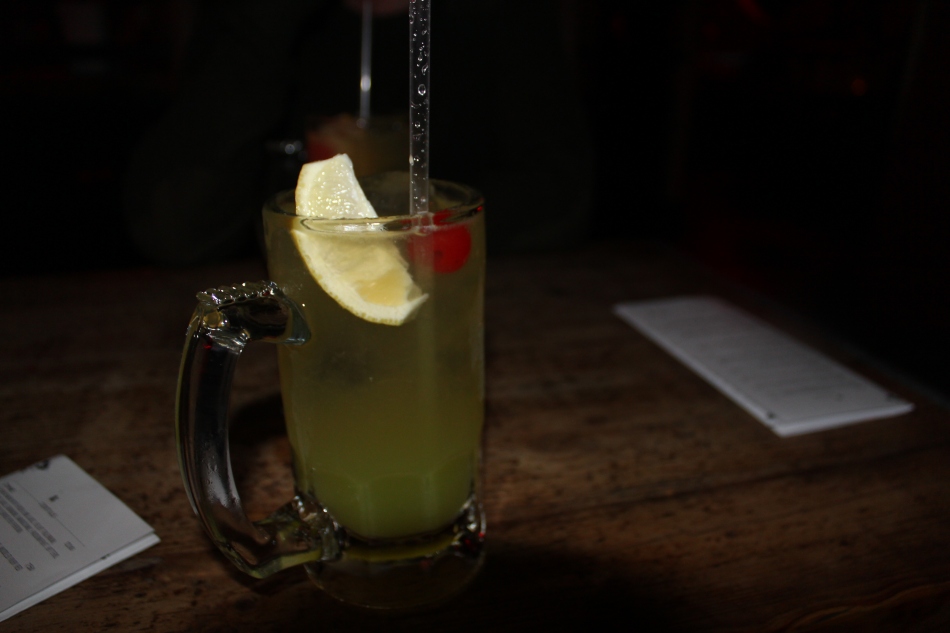 I’m gonna have to hit up their sweet stuff at some point – the peanut butter sundae was singing ‘eat me’ but I just wasn’t hungry enough to do it justice and I hate leaving food unfinished, so I reluctantly reigned in my greedy neck.

Service wise, it was fine but I’ve heard tales of it not being so good. I suppose you can’t really fuck up too much mid-afternoon on a weekday when there is hardly anyone there to serve.

The playlist is certainly eclectic, case in point, they played Metallica and Tinie Tempah back to back and that shit is LOUD. For some reason, I didn’t find the thumping beats as obnoxious and irritating as at La Bodega Negra. The sound level along with a  a number of other elements would in theory make me roll my eyes but somehow it just works.

MEATliquor opened up in Brighton last September and news is people there are going just as wild for it.

x2 MEATliquors, x1 MEATmission, x1 MEATmarket, it’s clear these guys are on a MEATcrusade (okay, they are way better at MEAT wordplay than my humble self)

Late to the party? Well, better late than never.

4 comments on “MEATLIQUOR: LATE TO THE PARTY MUCH?”